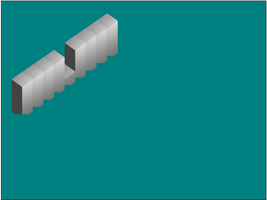 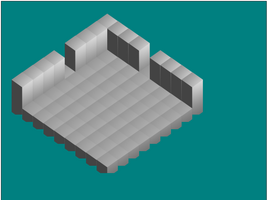 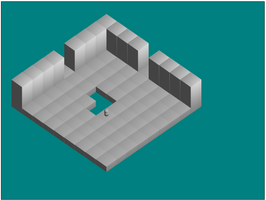 In my previous post, I discussed all the really cool things that went well (including some that maybe shouldn't have...). For this one, let's talk about what went wrong...

A good one to start with is the theme. I knew that this jam was coming. I mean you could set your calendar by its advent, right? However, up until the day after it had already started, my brain was as empty of ideas as a really empty thing. I finally managed to write something down, and I will quote it here in its entirety: "A witch-girl in training somehow." That's a world-beater of an elevator pitch if I ever saw one. I need to start carrying a notebook or something around. (SPOILER: I do. And there are no fabulous jewels of game ideas in it. Although I did chew up a few pages figuring out the isometric math for the tiles.)

And speaking of spoilers... One overarching theme for this post is going to be time management -- or the lack thereof. I'm not sure what my problem was. Maybe it was the arrogance of "oh, I've done this before, it'll be fine..." that kept me from even attempting to rough out a schedule. But the clock was ticking, even though I wasn't. It's easy, at the beginning to think "well, at least I've got 10... 9... 8... days, right?" and be all loosy-goosy about the timing. No problem spending almost three days messing with Blender, for instance. And without some kind of pre-commitment of time, well, there are other demands, you know? Cars need to be washed, burgers need to be grilled and yeah, let's marathon the last season of Star Trek: The Animated Series.

The problem was not with Blender (I have almost no problems with Blender -- love it!), but I needed to set some kind of limit that would have helped me decide that it wasn't the right way to go for this project a little earlier in the process. Pilots running up on the end of the runway (or coming in to land) set go/no-go decision points that they can use to easily determine if they should stop what they're doing. Things like deciding that if the plane is not in the air by the time you're halfway down the runway, you should abort the flight and stuff. Putting a go/no-go limit on explorations would have been helpful. By the end of the first day, I should have been able to make the determination that my first approach wasn't working and I needed to do something different. Those horrible grey cube arrangements at the top of this post? Yeah, three days of work. Pixar got nuffin' on me!

Once nice thing about front-loading your dev time is that the inevitable issues have less of a chance of killing you in the end. Eight days in, I discovered that despite my spiffy new game engine and hand drawn tiles, my animation rate was more properly measured in frames per minute, not per second! I figured it out, but it was kind of horrible trying to learn to use Racket's performance measuring tools and optimizations under the gun like that. That's the sort of thing you kind of need time to digest to use properly, which I didn't have. In my case, I blundered my way through some of the low hanging fruit and called it a day. Bleh.

And of course, art. Again, I should know this (shakes fist)! But, I had a hard time even figuring out how I wanted the characters to look, much less their world. I know there's lots of cool pre-existing game assets I could have used, but I wanted to do it. And I did, but I could have gotten so much more done if I had firmed things up earlier. However, of the art I did, I'm pretty happy with it and maybe I'll talk about that next time.

There was a series of science fiction books (James Alan Gardner, maybe? Too tired, not going to look it up now) where whenever someone screwed up really catastrophically, this weird alien with no head would beam in and grille them about just what were they thinking? when they released the grey goo/destroyed the ship/blew up the continent/whatever. In retrospect, I would like to ask my past-self some similar questions.

I hope future-self will take note and next time make a bloody schedule!