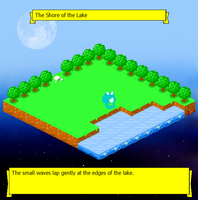 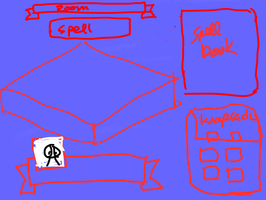 While there was a lot of stuff that I wasn't able to get to, I got a lot done on this project. For this post, I want to focus on what went right...

So, I started thinking about what I was going to do a few days before the jam began. I toyed around with a couple of ideas, but I read something about old ZX-Spectrum games and their isometric playfields that got me thinking. I also had some balls in the air from my last jam entry (STEAM+Spark) and I wanted to try to land some of them...

I started doing sketches and forcing myself to work on the spec and the scenario. I looked at a lot of artwork, trying to find a style that would work. For a while, I was totally going to do it all like the PowerPuff girls! However, I ran across some delightful artwork by a cartoonist who went by the name of Quino. I shamelessly ripped off the design of his character Mafalda as the basis for Von.

The story I want to tell requires both skits (dialogue between characters) and play in an environment, so I needed to support that. I roughed out an interface that looked like it would work and surprisingly enough, I've pretty much done things exactly as pictured.

There was a lot of artwork required, and unfortunately, some of it is just rough sketches. But by even having the sketches, at least I had placeholders ready to go for when there was no time left. And, because I had taken the time to generate guides for the art, I had precise pixels to work from so I stood a better chance than usual that they would all match up.

I wanted the "engine" part to be as general purpose as possible (no special cases in the actual rendering code and all), so I needed to get the scripting stuff I had started in STEAM+Spark working. I wanted everything from messages to dialogue to moving between rooms to be handled by the scripting. This was a big risk, and I nearly didn't make it. However, I was able to keep my head together and got the last of it working in the last hour before the deadline!

Most of my previous RPG-like games have very incomplete maps. I wanted to at least show some interesting rooms, but my previous approaches took up a lot of time to create. For this one, I came up with the simplest possible map editor -- my text editor! I drew out the rooms using characters like the old "Rogue" terminal adventure game. As dumb as it was, this approach proved it's validity on the last day of the jam -- in between obsessing about the scripting and a title screen, I was able to quickly lay out five rooms, with props and mobs. See the last screenshot for an idea. (Hint: "X" is a tree, "h" is a hedge and "w" is water. Hopefully that will get you started!)

The other thing I did this time around was improve my export pipeline -- not only did I come up with a recipe for "raco" (the Racket command line compiler), I also did the same for exporting the source code. This meant that I could put together my downloadable packages in seconds from the command line instead of trying to fight with the Dr. Racket compile GUI. Thanks to this, I was able to squeeze in some last minute changes.
Even though the game itself needs more work, I think the "engine" is doing a lot of the right things. Maybe next time, I can just use what I've got and not spend so much time doing greenfield development... Maybe... I guess a guy can dream, right?