Defining the World and Testing the Build 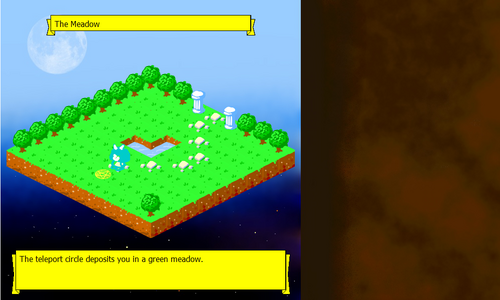 Faking 3D is really annoying! I spent more time trying to figure out how to reliably plot character movement without going insane and I still don't have occlusions working. Le sigh. (Try moving Von behind the tree in the foreground if you want to see what I mean.)

However! It's properly handling movement around the map from a path description it builds itself from the tile metadata so I don't have to go completely crazy duplicating my setups like Steam+Spark. And the map, oh yes, the map. I really wanted a map editor this time around. Some entrants to this jam were displaying their cool map editors. My previous try at it was lists of numbers (references to tile sprites). But now, I'm doing something far crazier, but it works, so I don't care... I define my map as a string, using rogue-style symbols (like "X", and "%" and stuff) to indicate where things go. It's nuts, but it works! (So far...)

I'm not terribly happy with the performance at the moment, not sure what's going on. Suspected it might be the field drawing, but that doesn't seem to affect things too badly, even though it's stacking tonnes of transparent sprites). Another possibility is the text on the scrolls. Will have to investigate further.

I'm trying to build with the command line so that I don't go mad with the Racket GUI compile. And, it seems to be doing the right thing, special thanks to the define-runtime-path stuff. The command I used to assemble my first release: