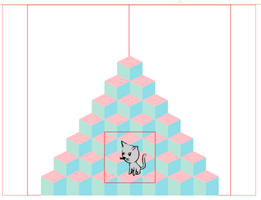 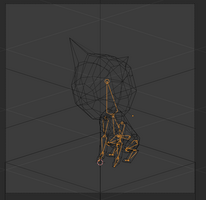 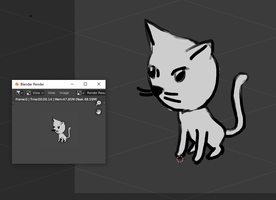 I worked on two major things today. Well, two and a half.

The half was that I changed the level definition format to use half squares instead of full tiles with an offset. This makes things a lot simpler to draw and figure out where a jump from a given cube should go. Now it's a little bit like checkers. I can use a single number to refer to the cube I'm on.

I also now precompute the tile drawing locations as well as mob sprite locations for each cube. This way I can just do a lookup to figure out where something should be plotted, instead of computing it each time.

Although I like to think I have an "artistic background" (that is, my desktop wallpaper is usually a piece of art), I'm not particularly good at it. This is probably mostly due to impatience, but also to not practicing enough... So, since I need to have views of my cat (and opponents) in all four Q*bert directions, and I'd also like to have a reasonable amount of animation, I'm going to be in for a lot of pain. So, I hit on the idea of using Blender as a kind of "artist's dummy". Basically, I build a rough model of the cat in Blender, rig it up, pose it in the different attitudes I need and then (this is the tricky bit) paint over it with the grease pencil tool to get a hand-done, but still on-model image from the four different angles I need.

Well, actually, I only need two angles. I can mirror them both to get the other two since the cat is symmetrical.

The original Q*bert game collected a few complaints about it's joystick mapping, and I imagine I will too. The most natural mapping would be using the 1, 3, 7 and 9 keys on a numeric keypad. Alas (and alas when using Blender too...), I only have one of those compact sorts. No numberpad. So instead, I'm using s, d, z and x. Not great, but at least they all fall fairly naturally under the hand. Unlike most JavaScript games I've seen, I need to determine what to do when the keyup is fired.

At that point, I hop the cat in one of the four directions. But only one hop at a time. Further hops require additional key presses!

No collision checking, edge falling-off checking or colour changing working, but at least it's possible to move around now.

Note, with Urlang, if you're subtracting negative numbers from something, but the negative in parens. Otherwise, this can cause wierdness.