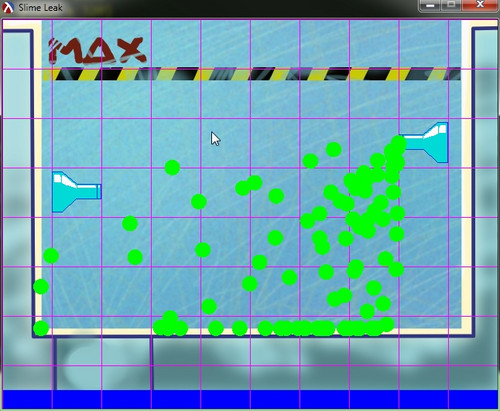 So, I realized that for my purposes, instead of gnarly vector math, I could instead just add a constant to my particle y component for gravity.  While I was at it, I also got a limited form of collision detection working -- it checks for an x less than the wall and a y greater than the floor.

It's time to start figuring out the piping. The basic idea of the game is that the slime is leaking, and you have to patch things up by fixing the pipes. So you need a "palette" of pipes to work with. So I have to draw those. Turns out that Krita, much as I love it otherwise, is not great for pixel editing. So I am currently trying a program called "Graphics Gale" (https://alternativeto.net/software/graphicsgale/) to draw the pipe artwork. It's a bit clumsy (perhaps because I just started using it), but it lets me do what I need to -- work on the whole sprite map, copy, paste, rotate and so on.

Unfortunately, most of the sprite generation programs seem to really have a preference for powers of 2, and GG is no different. It would let me go up to 64x64 (unlike Tile Studio II, which I really thought would be nice). But I couldn't use the 40x40 tile size that I'd started with (although /that/ was because I couldn't change the grid size in Krita). So I'm changing over to 64x64 tiles. Hopefully that will work out. I added a grid overlay (the magenta lines in the screenshot) so I could see where to put things.

Contain the slime before it's too late!