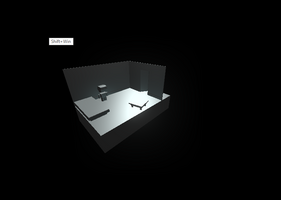 Well, as usual, I was trying to fix things right up to the launch... In this case, I realized that I should add some sort of introductory message for people trying to play the game who haven't read the blurb. Unfortunately, Racket took just a leeetle too long to compile it, and I wasn't able to upload before the Jam closed. Here is the intro, if you're interested:

This is my first attempt at a 3D game in Dr. Racket and, aside from running out of time, I think it went fairly well. The Racket pict3d library provides a lot of geometric primitives, but I wanted more interaction, so I used Blender to create the 3D assets. Once created, I saved them out of Blender as Wavefront OBJ files (see last blog post), and I read them in when the game starts. Data-wise, it's not too dissimilar to my last entry (Harmony) in that the world is a grid. However, I'm a little more sophisticated about it this time around. Among other things, I use structs to store the state-vector instead of lots of globals.

Also, because I hate to hardcode things, I wound up creating a cute little DSL for specifying event actions. I'll write a separate post about that one later, because even though it's fairly simple, I'm pretty happy with it!

A young girl and her Science Faire project in a world of STEAM!